I decided to plan a scavenger hunt around our school with clues. These clues would lead them to these hidden treasures. I took the writer’s notebooks and put them into two boxes. I wrapped both boxes up and placed them in the library.

I carefully put the clues in envelopes and placed them in different locations. In class, I showed them a powerpoint presentation of their “mission”. It was a lot of fun as I played the mission impossible theme song in the slide show to get them pumped up. There were so excited to look for the clues. Each clue was a riddle in which the answer would lead to the place where the next clue was hidden.

As a class, we went together finding each clue and coming up with an answer. They managed to find the hidden treasures in the library. It was a lot of fun for the kids. As they ripped open the two wrapped packages, they found notebooks inside with their names on it. I explained to them this was their writer’s notebook a place that will hold many of their “treasures”  this year. 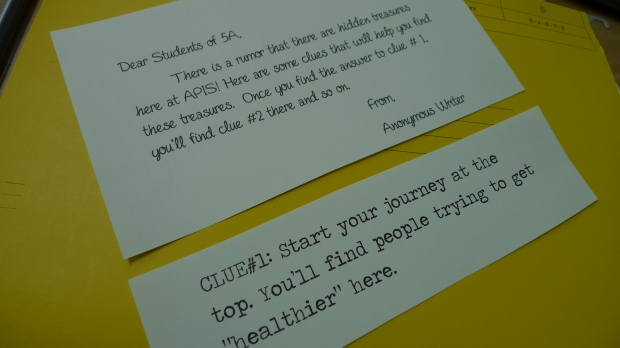 Envelopes with the clues inside!

I took out my brother’s very smooth, shiny, and expensive breedlove acoustic guitar out of it’s case tonight.  I started practicing some of the chapel songs that my students will sing on Friday. I thought it would be nice to play the guitar in class when we practice the songs. However, as I started playing the very easy songs I had chosen, I was easily reminded of why I don’t play. I sounded awful. My strumming was off, especially for really slow or really fast songs. There’s really only one tempo I can play to.

As I played my songs frustrated at the sounds coming out an idea popped into my head. I decided to look up the song version on youtube and play along to it. I knew there must be a good version on youtube that I could try to play like. I came across a video of a girl, looks like she could be fifth grade, playing the song on guitar. So I watched the video a few times and tried to imitate her strumming. It was helpful to see and hear someone else strumming. My strumming  was still pretty offbeat and not that great, but some improvement.

Trying to pick up the guitar tonight after such a long time reminded me of a few things.  When you are learning to play the guitar or any instrument, it is always helpful to learn from an expert. Whether it’s a teacher or a youtube video, when you have a model, I believe you will become a much better musician than having no model. The same thing goes for learning how to write. For the writing workshop we always have “mentor texts” that students use to help them with their writing for each unit. These mentor texts are examples of really strong writing from published authors or sometimes even students.

As I get ready for our first major writing unit on personal narratives, I have a set of mentor texts that I will read aloud(many times) and students will have copies of. I was able to buy a few more great mentor texts while I was home in NY this summer, including Fireflies by Julie Brinckloe and Hey World, Here I Am by Jean Little. I’m excited to add these mentor texts to my collection. In addition to those, I made copies of really good personal narratives that my students last year published.

The last thing I learned is that anything worth learning takes time, practice and pain. After 4o minutes, I had to stop practicing as my fingers on my left hand started hurting where I have to press down on the strings. Writing for the reluctant writers in my class is going to be a bit painful for them at first. I’m going to make them write a lot this year, whether they like it or not. One of my very expressive boys in my class said the other day was evaluating each period in this manner:

Later that day, as we walked up the stairs from lunch, I told him that by the end of the year, when he thinks of writing time, he will go “YEAHHHHH!” Let’s see what happens! 🙂

Week 1 is done! I’ll leave you with some PS 22. They are awesome. If I were a better musician, I would make my kids sing cool versions of pop songs too. I think we’ll just stick to our chapel songs for now. 🙂

It feels like I’ve been in school for weeks already, but it’s only day 3!  It’s been tiring, but a smooth start. There is just soo much to do and prepare for in the beginning of the school year! I’m really excited though because every year it feels like I am doing a better job than the previous year as I learn from my mistakes. This past summer being in NY was good for me. It definitely inspired me through conversations and other things that happened to become a better teacher this year.

My new students are growing on me quickly! It’s a bit weird, but in the first few weeks of school I go through a phase of missing my students from last year. I see them sometimes popping their heads outside my classroom windows or in the hallways where they scream “Ms. Kiiiim!!!” and give me hugs. Its really heartwarming to know that they miss me as well.  I think I have a really good groups kids again this year! I have 10 girls and 5 boys in my class! I don’t think I’ve had such a girl dominant class before. We’ll see what happens. 🙂

Here’s some artwork we did the first few days of school, where students use thick paintbrushes and paint straight lines. They use just one color and mix it with some white. It sounds easy right?! Well the kids love doing this. I’ve done it a few times its pretty therapeutic after a long day!  We end up using the painted paper for different projects we do doing the year instead of construction paper. The outcome is pretty cool on some of the bigger collage type of art work we do! 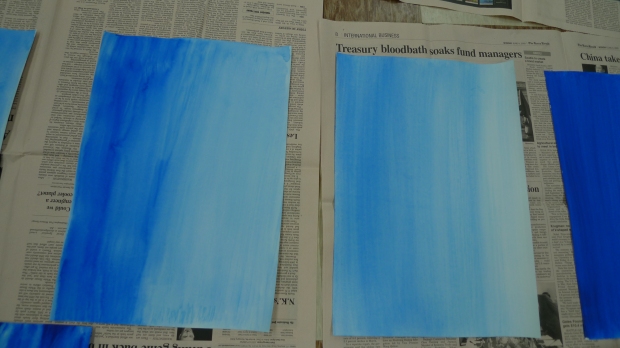 I just got back from our yearly staff retreat. This year we went to the East Sea area in Korea for 3 days and 2 nights. I was very excited to be at the beach, but once we got there it was raining non-stop and we were expecting a possible typhoon. Well luckily I don’t think we were hit with a typhoon and we did get some sunnier weather on the last day there. Some of the purposes of our retreat was to build community within our faculty, as we have many new teachers this year. Also, we revisited our school wide expectations and came up with new goals to focus on for the school year.

There’s an activity that we’ve been doing at our staff retreats that I’ve adjusted and incorporated into my first week of school. On long strips of construction paper (you can cut sentence strips in half), I have students write their expectations/rules for a classroom. They write one expectation on each strip. Then, I have them place the strips on the floor and students group the ones that are similar in the same column. After, we sit together in the rug area and I write on chart paper the expectations we have come up with. Then we do some brainstorming and combining to come up with a set of classroom expectations that we all agree upon. I write up neatly a final copy on a new sheet of chart paper and they each have to sign it. I find this an effective way to come up with expectations instead of just telling students these are the rules, you must follow them. This way, they have a greater sense of ownership of the classroom expectations. I will try to post some photos when I do this activity with my students this year.

*Edit* Here are some photos from doing the activity with my students a few days ago!

I ❤ the Metropolitan Museum of Art. I had a chance to visit with my mom while I was in NYC. I wanted to go see the rooftop bamboo exhibit, but when I got there they told us that it was closed due to weather! Apparently because it rained earlier that day, it was wet and I guess slippery??! Well as we walked around the different floors, I’m always overwhelmed by all the amazing art there. There’s just so much! I’m always reminded of the book: From the Mixed Up Files of Mrs. Basil E. Frankweiler, when I go there. I really liked that book when I was younger. It’s a book I like to recommend to my students as well. I love that it’s a story about this brother and sister that run away and live inside the museum. I always wished I could do that as well.

It’s hard to not love NYC when you can find people ready to write you a poem for a small monetary contribution. This was actually the second person I came across on this lovely summer Saturday ready to write a poem with a typewriter for people. I knew I had to get a poem from him. When he asked me to choose a theme for the poem, I didn’t know what to say. The first thing that came to my mind was summer. After 10 minutes or so, I had an original poem from him! I actually like it a lot. I ended up giving him $10 for the poem.

Maybe I can use this somehow in my poetry unit this year.  Maybe I will make them have a poetry stand where they have to write poems for people on the spot! It could be a fundraising idea?! I’ll have to think more about it. 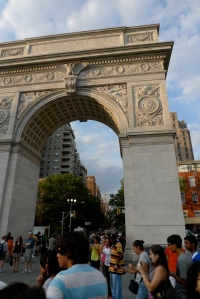